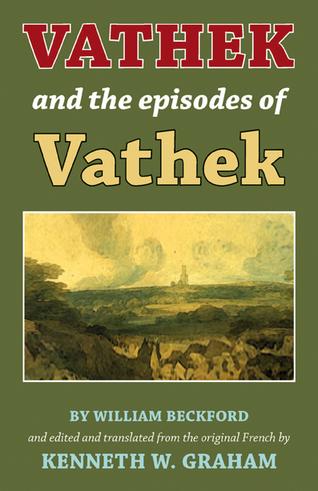 This is the long-wanted essential modern edition of William Beckford’s Vathek with the Episodes of Vathek. The text of this edition is a new translation by the leading Beckford specialist. It corrects many earlier errors and presentations of Beckford’s great novel.

It translates into English the original French language texts of Vathek and Les Épisodes de Vathek, Professor Graham then interprets Beckford’s original edition of Vathek - the novel being first published in Lausanne in 1786 (although dated 1787) not in England. He also discursively discusses  and the earliest manuscripts of the Épisodes, now housed among the Beckford Papers in the Bodleian Library.

As Professor Graham shows, previous translations originated from different eras and diverse translators, who were also mistaken in the manuscripts or editions they chose to translate.

The first translator of Les Épisodes, Sir Frank T. Marzials, worked with texts provided by Lewis Melville, who had found the manuscripts among the Beckford Papers, at that time in the hands of the Duke of Hamilton, a Beckford descendent.

There are a number of drafts of Les Épisodes among the Beckford Papers and Melville, understandably, chose the most clearly written drafts prepared for Beckford by an amanuensis in the late 1820s when Beckford was considering having them published. They were, however, too evocative of an old scandal that Beckford unavailingly wished forgotten. So they were put in storage with the rest of Beckford’s papers. That scandal was, however, much more obviously present in earlier drafts that Melville obligingly ignored.

Of Vathek, prior to this edition, two translations were published, one by Samuel Henley (1786) and the other by Herbert Grimsditch (1929). The translator, Samuel Henley, perpetrated an audacious fraud on Beckford’s manuscript, not only by publishing his translation without Beckford’s knowledge and permission, but also by imposing a system of changes on Beckford’s French text for purposes of parading his own scholarship. The only solution to faulty sources and faulty translations is to begin again with the most original documents. That is what this edition does.

Kenneth Graham is professor emeritus at the University of Guelph in Canada and a bye-fellow of Robinson College in Cambridge. He has also served as exchange professor at Universität Konstanz in Germany. He holds degrees from the Royal Military College in Canada and University College London. He was named their “North American Scholar” by the Jane Austen Society of North America.

"Graham's new edition is highly recommended. It puts before the reader a closer, more personal feeling to Beckford's work...Coming from a life-long student of the Caliph, it is a major contribution to Beckford scholarship." - Malcolm Jack, The Beckford Journal.

Vathek and the Episodes of Vathek