It also provides much contextual material about Harriet Martineau, the Brontë family and the history of Manchester.

In particular it casts significant fresh light on Mrs Gaskell’s influential inner circle of friends, adding to our appreciation of her writings and of her life.

The book uncovers some of the mysteries of Mrs Gaskell’s key relationships, most notably concerning Miss Mitchell, who has previously been misidentified in Gaskell biography. Given Mrs Gaskell’s statement that Miss Mitchell was one of the two principal influences in her life, a deeper understanding of this shadowy presence and the figures around her is vital to our understanding of the author.

Existing orthodoxy identifies Miss Mitchell as Rosa Mitchell, a visiting governess in the Gaskell household. However, the Miss Mitchell mentioned repeatedly in Mrs Gaskell's letters was in fact Rosa's much older sister, Janetta Bishop Mitchell. Janetta is shown to have been an important mentor, not only to Mrs Gaskell but also to the writer Harriet Martineau. Janetta was an example of the many sophisticated women with few material resources who, despite remaining unmarried and culturally invisible, nevertheless found their own paths in 19th-century English society.

Robert C. G. Gamble is a graduate of University College, Oxford, and worked for many years in the advertising industry. Now retired, he is a writer and researcher who has had a number of articles published in Brontë Studies, the official research journal of the Brontë Society.​
​

"This is a significant contribution to Gaskell biography...To construct such a detailed biographical picture in a way which is easily assimilable by a reader is no easy task...One does nonetheless get a sense of the complicated web of Gaskell's relationships through family, religion, friendship, sympathy, obligation." - Anthony Burton, The Gaskell Journal.

​"Mrs. Gaskell's Personal Pantheon is a great resource for any Gaskell or Martineau scholars in building the picture of Victorian networks that played such an important role in the development of these two great writers. It also reaffirms the sheer determination that both had to have to overcome the discouragement and gender assumptions of the time.

"Robert Gamble's book is definitely worth a read for those interested in delving deeper into the social networks that produced the important ground breaking work of these great nineteenth century writers." - Stuart Hobday, biographer of Harriet Martineau.

Writers and Their Contexts series, No. 10​ 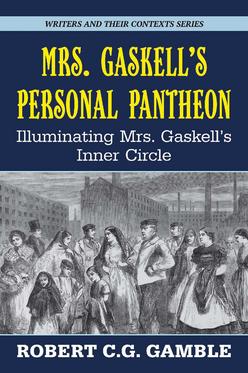