This acclaimed landmark work – in this substantially revised second edition – is a key study of the American cultural experience.

It examines the formation of an American personal and national identity through the experience of emigration. It asks what was the ‘American difference’, and what constitutes the American character. It explores in detail the crucial influence of emigration from Europe.

It explores American readiness to change, to break with the past, and its faith in future possibilities. Every one of these supposed qualities is traced by Professor Fender to the psychology of emigration.

As a new nation, America had to create and define itself. As the rebellious child of a distant but powerful parent America had to struggle against a metropolitan center with which it shared a language and a legal system, but it strenuously defined itself differently.

This work is about the power of American ideology and how it unlocked the creative potential in the lives and writings for ‘ordinary’ people. It is a work like no other. It says much that is original on writers such as Cooper, Jefferson, Thoreau, Hawthorne and Henry James, among others. Professor Fender has also examined many accounts of ordinary people through diaries, letters and contemporary documents.

The book examines how innovations in structures of life, government and writing entailed key cultural themes.  It argues that the rhetoric in which emigration was promoted, defended and attacked became the exhilarations and the anxieties of the American difference. American literature thus returns repeatedly to narratives of captivity, adolescence and initiation as shown in its distinctive literary forms.

Contents:
CULTURE AND NATURE: The British idea of America and how it became politicized; the rhetoric of renunciation; the American cultural project.
RITES OF PASSAGE: The passage over; Individual reformation as a model for the reformed community; Narratives of initiation, raw and cooked.
FALLING AWAY: Disappointed immigrants; alternative voices to the dominant ideology; Back migrants who turned themselves into travellers.
"RUINS SO SOON!" Reveries of European culture; The figure of death in life; The past as lost.
JAMES, WHARTON AND THE INTERNATIONAL THEME: The American discovery of Europe and the problems it caused.
Bibliography; Notes; Index.

His other books include a study of the rhetoric of the California gold rush, Plotting the Golden West: American Literature and the Rhetoric of the California Trail (1982); Nature, Class, and New Deal Literature: The Country Poor in the Great Depression (2011), about how the American country poor got treated in the novels, documentary photographs and bureaucratic prose of the New Deal liberals. His most recent book, The Great America Speech: Words and Monuments (2015), explores how certain speeches -monumental in American culture as well as in the physical monuments in Washington, D.C. - have formed a discourse of American identity that runs counter to the better known American dream of free enterprise and every man for himself. He has also written The American Long Poem (1977); 50 Facts that Should Change the USA (2008); and with John Sutherland, Love, Sex, Death and Words: Surprising Tales From a Year in Literature (2011).

“promises to become a classic of its kind; it combines impressive knowledge of American history and literature with a remarkable sensitivity to the language of common letter-writers and diarists.” – Edwin J. Barton, American Literature.

“Every part of his book is an eye-opener.” – Professor Sheldon Rothblatt, London Review of Books

“You cannot separate being an American from being an emigrant, so the matter of personal and national identity is intimately related to the experience of emigration and everything – both literal and metaphoric – that stems from that experience. This is Stephen Fender’s concern and he has scrutinised diaries, letters, contemporary documents as well as more canonical literature, from Puritan times to the present, to identify a ‘discourse of emigration’ and how, and to what ends, it works. The breadth of his knowledge and the extent of his reading are very impressive and he peruses even the most modest text with a rare subtlety and sympathy. The result is a rich and fascinating work which illuminates in a new way the crucial constitutive American experience.” – Professor Tony Tanner. King’s College, Cambridge.

“A bold contribution to the study of America’s imaginative meaning” – Peter Conrad, The New Statesman.

“Fender is especially good at relating political and historical imperatives in the creation of an American consciousness and thus of an American literature . . . an intriguing and successful narrative.” Peter Ackroyd, The Times.

“Every part of his book is an eye-opener. It will be imitated and its thesis extended beyond the Anglo-American connection. It will doubtless form an important part of on-going work in immigration theory.” – Sheldon Rothblatt, London Review of Books.

“Ultimately, this infinite faculty of reinvention, which makes the study of the protean and maddening American scene so awkward, is also what supplies its fascination. Fender does well by both aspects.” – Christopher Hitchens, The Guardian.

“This book shows, as we expect, elegance and suppleness of language and of thought, all the best qualities of the academic mind.” – Martin Green, Journal of Interdisciplinary History.

“This impressive study, however, leaves one with a sense of optimism in stating that American culture “continues to reinvent itself, as always, by confronting its contradictions” – Edward A. Abramson, Times Higher Education Supplement. 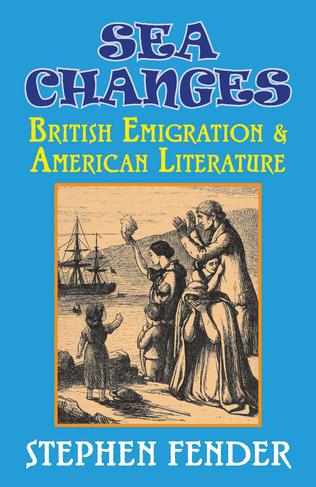