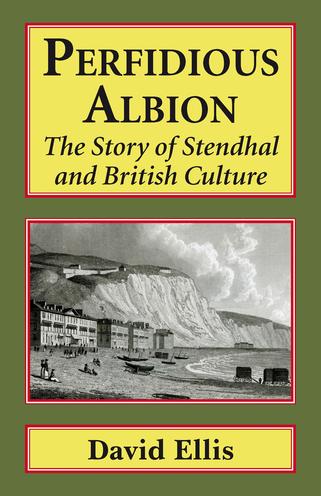 "What to make of the British?" is a question that puzzled Stendhal throughout his whole life. In this new work, which is both a biography and an exercise in cultural history, David Ellis brings to bear on the issues it raises much new and unfamiliar information.

Italy is the foreign country with which Stendhal is most commonly associated. The multiplicity of his Italian connections makes it less surprising that so much has been written about them, and so comparatively little about his consuming interest in British culture. Yet this book makes a strong case for believing that Britain mattered just as much to him, if not often more, than Italy, especially as far as his interest in literature and politics is concerned. In these days when Anglo-French relations are about to enter a new phase, much of what is discussed here remains surprisingly relevant.

After the fall of Napoleon, and the restoration of British links with the European continent, Stendhal was by no means the only French writer who was anxious to know more about this comparatively small island which had emerged victorious from more than twenty years of warfare. How had the wealth that had financed so many alliances against the French Empire been generated and what were the consequences of rapid industrialisation on the country’s social fabric? More importantly, how had it managed to be so effective and influential when power was not in the hands of a single authority but divided between a king and two houses of parliament? These were questions which Stendhal felt were highly relevant, not only to the political future of his own country but also to Europe in general.

As a writer, he was however also fascinated by Britain’s literature, both of the past and present. From the beginning of his literary education, Shakespeare struck him as the most impressive dramatist he had ever read and when he himself made a modest entry on the literary scene, after Waterloo, the most famous poet in Europe was Byron. Among many other matters, Ellis examines the significance of Stendhal’s meeting with Byron and the impact on him of the novels of Scott, at a time when these two writers were dominating the European scene. He describes the efforts Stendhal made to learn enough English to be able to read in the original, not only both of these contemporary writers but Shakespeare, Fielding as well as many other British authors from the past.  He shows how the political ideas about Britain which Stendhal had developed during the years of separation were modified by personal contacts, new reading and the three trips he made across the Channel in the 1820s. That was the decade when he was also writing hundreds of articles for publication in London journals and it is in these years especially that Stendhal’s own literary development is intertwined with his numerous British contacts (who include Hazlitt). At the end of his book, Ellis reflects on how far the relationship was reciprocal. That is to say that it is one thing to investigate what Stendhal thought of the British as well as what he might have gained from them, which is the major part of this study; and another to wonder what they could gain from him.

Henry James ended a review of the first biography of Stendhal to appear in English by recommending his work to `persons of “sensibility” whose moral convictions have somewhat solidified’. Even without examining whether James was justified in implicitly excluding himself from the category he establishes here, it would seem evident enough that his words are in need of the gloss Ellis provides. About sixty years ago, The Red and the Black was a model for a number of British novelists absorbed in the mechanics and difficulties of social mobility and its author was sufficiently admired to justify Aldous Huxley’s description of Stendhal as `the greatest novelist outside Russia’. That he now takes his place, along with Balzac and Flaubert, in the great triumvirate of 19th`realist’ novelists makes him by far the most important French writer to have grappled with the difficulties of Anglo-French relations in the years after 1815 and a worthy object for this lively and entertaining study.


Contents: Preface; Part 1: Grenoble; Paris and Italy; Apprenticeship; Worldly success; Russia; Decline and Fall; Part 2: The Foreigner in Italy;La Scala; Questions of Language; … and of Art; Napoleon; The Edinburgh Review; The First Visit to England; Romanticism, Love and Walter Scott. Part 3: The Book on Love; Love, Sex and the Second Visit to England; Shakespeare, Kean and The Examiner; A New Career; Byron and Scott; Hazlitt; The Death of Byron; The Third Visit to England; Armance; Yet More Byron; Hobhouse Answers Back; More Scott, The Red and the Black and the July Revolution. Part 4: Civita Vecchia; Lucien Leuwen; Lockhart and the Tourist Memoirs; A Turn to the Right?; The Charterhouse of Parma; Post-mortem; Paton and Henry James; Final Reckonings.

​Professor David Ellis is Emeritus Professor in the School of English, University of Kent. He read English at Cambridge under F. R. Leavis and then spent three years teaching in Australia.  He also had three, year-long visits to the United States, two of them as a visiting professor at the University of Massachusetts in Amherst and then the University of Indiana in Bloomington. A third was as a research fellow of the National Humanities Center in North Carolina.

After first publishing a translation of Stendhal’s Souvenirs d’Egotisme and then a book on The Prelude with Cambridge University Press (Wordsworth, Freud and the spots of time), David was invited to write the third volume of the Cambridge biography of D. H. Lawrence (Dying Game).  This appeared in 1998 and was short-listed for the James Tait Black prize.  Following its publication he continued to work on Lawrence, writing numerous essays, and publishing in 2008 Death and the Author: How D. H. Lawrence died, and was remembered (Oxford University Press). He has also written a good deal on Shakespeare, in 2007 linking his interest in the plays to a fascination with comedy I order to produce Shakespeare’s Practical Jokes (Bucknell University Press). More recently he has gone back to the Romantic period with Byron in Geneva: That Summer of 1816 (Liverpool University Press, 2011); continued to explore problems of biography in The Truth about William Shakespeare: Fact, Fiction and Modern Biographies (Edinburgh University Press, 2012); and published Memoirs of a Leavisite: The Decline and Fall of `Cambridge English’ (Liverpool University Press, 2013). In April 2015, Bloomsbury brought out his tribute to a philosopher friend and Kent colleague, Frank Cioffi: The Philosopher in Shirt-Sleeves, and Clemson University Press published his Love and Sex in D. H. Lawrence.

​​“David Ellis is a writer of exceptional insight and his new book throws a fascinating light on  Stendhal's views of Britain, and of British writers.” Jenny Uglow, biographer, historian, critic and publisher.

Perfidious Albion. The story of Stendhal