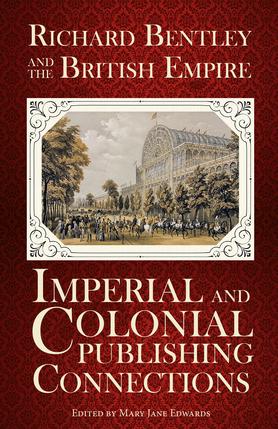 History of the Book series, No.5.

​Richard Bentley (then Richard Bentley and Son) was the leading publisher of fiction in three-volume form for much of the 19th century, and his business traded globally. He was one of the most important publishers in his time. He worked with many of the best-selling British and overseas writers, including publishing much important later fiction in single-volumes.

From 1832 until it was sold to Macmillan in 1898, his London-based firm developed networks to distribute its books throughout the British Empire. It also issued works of fiction and non-fiction about Great Britain’s various colonies in what are now Australia, Canada, India, New Zealand, and South Africa.

The book historians and scholarly editors who have contributed to Richard Bentley and The British Empire: Imperial and Colonial Publishing in the 19th Century analyse fundamental aspects of the structure, history and functioning of the international book trade. They explore the many roles that Bentley played in disseminating information about these far-flung possessions and in helping to develop - and modify - British cultural values in them.

As well as documenting the geography and history of regions in the Empire, the contributors to this volume explore many questions including race relations and slavery, that are still relevant today.

Mary Jane Edwards is an internationally known editor of literary texts. She taught in the Departments of English of Acadia University and the University of British Columbia before joining Carleton University as Professor of English. In 1996 she was awarded the Henry Charles Chapman Fellowship from London University’s Institute of Commonwealth Studies. She has contributed to three anthologies of Canadian literature and prepared critical editions of Francis Brooke’s The History of Emily Montague and William Kirby’s Golden Dog. She is the director of the Centre for Editing Early Canadian Texts.