The power of these first-hand and well-illustrated recollections about a boyhood in occupied Holland lies in their extraordinary ordinariness.

As the fourth child of a large Catholic family in The Hague, Jan was spared the horrors of true persecution by the Nazis.  Yet his detailed memories of deprivation and dread vividly conjure up the harshness of Dutch life under Hitler’s cruel rule.

Young Jan was roughly Anne Frank’s age during the war.  Published here for the first time, his wartime memories preserve yet another child witness to adult injustice.  Touching and surprisingly witty, his stories demonstrate how danger and domesticity go hand-in-hand during wartime.

As a boy, he was able to slip past the Nazi occupiers unnoticed and unharmed, often running errands for adults who dare not show themselves, joining a hidden resistance.  This is how Jan comes into brief contact with some of the war’s heroes and villains.  By chance, his after-school job as an apprentice-baker placed him at the side of a prominent member of the Resistance—while a random schoolyard spat with a bully brings him to the headmaster’s office to face the boy’s Nazi father, the Dutch leader of Germany’s largest counter-intelligence programme.

For students of this important moment in history, each nail-biting recollection introduces features of the occupation with a disarming matter-of-factness: food coupons, bombardments, people forced to go into hiding, the constant search for food, the lack of electric light, curfews, coats sewn from blankets, and secret radio programs.

Jan Duijvestein was born in The Hague, Holland, into a large middle-class Catholic family with seven children—all of whom miraculously survived the war.  Wartime dangers never damaged his infectious optimism.  Eventually, Jan set up a realty business in The Hague.  When the Cold War threatened Europe once again in the 1970s, memories of his liberation by American troops influenced his decision to emigrate to the United States of America with his own young family.  Later circumstances led Jan back to his hometown, where he wrote down these wartime recollections as a legacy to his first grandchild.  The work is translated from Dutch and introduced by his daughter Janine Barchas.

"His detailed memories of deprivation and dread truly conjure up the harshness of life under Hitler's cruel rule." -  Andrew Chapman, The Genealogist.

"A Boyhood Under Nazi Occupation is a treasure of storytelling and history. Chronicling a Dutch family's perseverance, ingenuity, and daring as they struggled to survive the Nazis, the book is rich with details that give the author's memories of his boyhood, and his experience of war, immediacy, intimacy, and resonance." - Laura Hillenbrand, author of Seabiscuit and Unbroken. 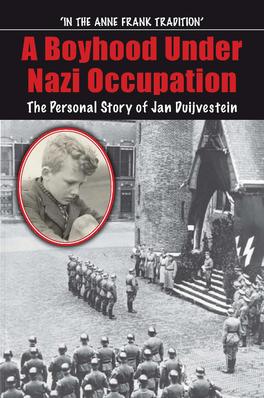 A Boyhood Under Nazi Occupation
The Personal Story of Jan Duijvestein