The Making of a Novelist

Second edition with a new Preface by the author, 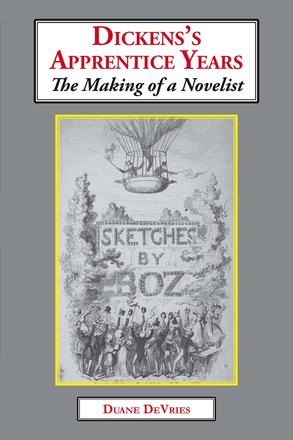 ​Ever since the fifth instalment of the Pickwick Papers in 1836 scholars have expressed amazement at the virtually overnight emergence of the 24-year-old Charles Dickens from an unknown nobody to the literary lion of the day.

At one bound he leapt from nowhere to the summit of literary success and fame. How did he do it?

This is the classic modern study of how Dickens staged his grand entrance. Critics of his day thought he did so without warning or fanfare. How was it possible for an obscure newspaper reporter to write, in his early twenties, such a brilliant, popular work as Pickwick? Where did he acquire the nicety of observation, the fineness of tact, the exquisite humour, the wit, heartiness, sympathy with all things good and beautiful in human nature, the perception of character, the pathos, and accuracy of description?

This work is a thorough and illuminating study of this central question, and fully illuminates Dickens’s early development.

Professor DeVries is a leading scholar and bibliographer of Dickens. He is a retired Associate Professor of English from Polytechnic Institute of New York University, where he served as Head of the Department of Humanities and Communications. He has edited Bleak House for the Crowell Critical Library (1971); and served as editor of Dickens Studies Newsletter; as associate general editor of the Gale Information Guides to American Literature, English Literature, and World Literatures in English, a 42-volume biographical series; as general editor of The Garland Dickens Bibliographies (11 volumes) and its replacement The Dickens Bibliographies (AMS Press, 3 volumes, 3 forthcoming). He has most recently, published the first two volumes of General Studies of Charles Dickens: An Annotated Bibliography (AMS Press, 2004, 2010). A third volume is in press and a fourth will be published in 2018.​

​“examines every shred of extant information about Dickens to try to answer the question of the sudden flowering of talent.” - Choice.

a “massive compilation of research…a careful reading of the original texts…a book which every student and admirer of Dickens will profit from and enjoy.” - F. S. Schwarzbach, The Dickensian.