This innovative new work highlights how the presence of Gothic elements in the Holmesian Canon problematizes the normative action of the detective. It examines the anxieties which accompanied the changing universe of Victorian and Edwardian society in the context of the development of criminal science. Recently the figure of Sherlock Holmes has been the object of countless re-writings, re-interpretations, and adaptations in a vast array of media including literature, graphic novels, TV series, and cinematic renditions. The vast majority of these adaptations tend to present the detective and his adventures as the triumph of rationality and of the scientific method over the disruptive forces of crime, but neglecting to take into account the dreadful considerations that these forces bring to light.

Sherlock Holmes is generally portrayed as a beacon of rationality, the scientific detective par excellence whose logic solutions actively safeguard late Victorian and Edwardian society and its collective unconscious. His empirical approach to the mysteries he is called to solve usually sparks comparisons with thinkers like Tyndall, Huxley or Spencer, thus firmly encapsulating him in the positivist milieu of the time. Buried just beneath this normalizing façade, however, lies a complex relationship with the Gothic tradition and its tropes, an intertext which Doyle knowingly plays upon while openly disavowing it.

The problematic distinction between “serious” realistic literature and the supernatural dates back to the dialectic between novel and romance, and was brought to the forefront during the Romantic age, especially in the context of the rise of the Gothic novel. Yet Gothic literature and its later incarnations, the Sensation novel and the fin de siècle horror, allowed for an unparalleled degree of freedom in tackling repressed anxieties in a variety of issues, ranging from heredity in all its connotations, to social mobility, to space and colonization.

A perceptive writer, Doyle immediately recognised the potential of Gothic echoes in articulating disquiets produced by a multiplicity of factors: from scientific and technologic development and the uncanny possibilities they engendered, to the Imperial enterprise and the fear of contagion and reverse colonization, to the emergence of disruptive forces within the Victorian family and society, the ultimate objects of the detective’s protection.

To let the detective’s rational light shine, Doyle summoned a particularly deep darkness: one that even Holmes’ brilliant solutions struggle to dispel. Camilla Del Grazia provides a broad overview of the rise of the Gothic novel, introducing the debate around the realist novel and romances, with particular focus on the critical condemnation of “irrational” elements. Central features of classic Gothic novels are considered in relation to the works of Horace Walpole, Anne Radcliffe, Clara Reeve, and Matthew Lewis. Particular attention is paid to specific aspects of the Gothic novel. Specifically its uncanny use of the past and of remote spaces as instruments of suppression, and the characterization of its three main figures: the hero, the persecuted maiden, and the tyrannical villain.

The work also investigates the evolution of the Gothic genre from its outset to its fin de siècle articulations. The author initially examines its reception after 1790 and the parodic adaptations that it engendered, and provides specific insight into Jane Austen’s Northanger Abbey and Thomas Love Peacock’s Nightmare Abbey. Del Grazia considers the evolution of Gothic tropes in early Victorian literature, and their application in the novels of Charles Dickens and Charlotte and Emily Brontë. She then focuses on their reinterpretation in the short stories of Edgar Allan Poe. The work also offers a theoretical overview of the complex scenery of fin de siècle English literature, including an account of the Victorian Gothic novels of Robert Louis Stevenson, Oscar Wilde and Bram Stoker, and  their profound impact on the cultural milieu of the end of the century.

Sensation novels are considered as the joining link between the Gothic genre and detective fiction, with specific reference to the novels of Wilkie Collins, and his depiction of female confinement as well as private detection. To provide an exhaustive introduction to the creation of the character of Sherlock Holmes, an examination of first instances of crime fiction is then provided, by comparing the works of Emile Gaboriau, Edgar Allan Poe, Wilkie Collins and Charles Dickens and the detective figures that they shaped.

The second section of the present work is concerned with the identification of Gothic tropes in the Holmesian Canon, and their articulation in different categories according to their ramifications and sphere of action. The author specifically examines the uncanny consequences of the reception of new technologies and scientific discoveries on Victorian culture and social order, analyzing instances of degeneration, regression and atavism in Holmes’ cases, and delineating a Sherlockian “criminal type”. The concept of melancholy and its reinterpretation in light of the theorizations of criminal anthropology is then applied to the figure of the “great detective”, in order to demonstrate how his powerful normalizing influence is achieved at the cost of his exclusion from society.

Lastly, Victorian society is analysed, with a focus on the climate of social tension that preceded the outbreak of the First World War. Specifically, the Gothic elements of intrigue and secret societies are analyzed in their Holmesian rewriting, while the strictly Victorian themes of the integrity of family and of the evolution of female identity are considered in their problematic development. 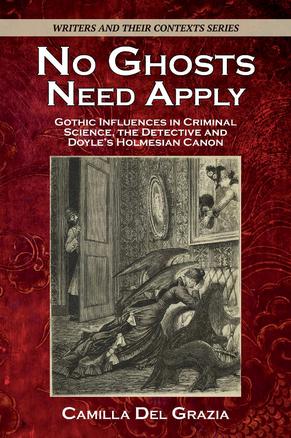