For thousands of years horses played a central part in the lives of people in many parts of the world. They provided mobility and played a major or dominant part in warfare. They were the main source of power other than human labour, so much so that we still measure the power of engines in horsepower. The advent of industrialisation and the steam engine, far from finishing their role, actually accentuated it, and horses became essential to nineteenth century agriculture and the life and functioning of the great modern cities of the Victorian Age.

Socially, they came to play a larger role than ever, with a passion for the turf uniting all classes of society with hunting and events the central feature of rural social life. The cavalry was still the senior arm of the British Army. By 1900 the number of horses in Britain was at an all-time high. Yet, within thirty years all of this had passed away and the horse and the entire enormous industry that had grown up around their breeding, care, use, and equipment had been reduced to a minor feature of British life.

This was a great revolution in everyday British economic and social life, yet hardly studied. Looking at it can tell us a great deal: about how different the modern world is from that of our ancestors; about the nature and impact of transformative technological and economic revolutions and their workings; and about how we can think about other, similar revolutions that are rapidly drawing upon us.

An historian, he graduated from St Andrews University in Scotland in 1976 and gained his PhD from the same institution in 1984. He has authored several books, including Empiricism and History (Palgrave Macmillan, 2003) and was co-editor with Nigel Ashford of The Dictionary of Conservative and Libertarian Thought (Routledge, 1991).  Most recently The Wealth Explosion: The Nature and Origins of Modernity (EER 2019) and The Street-wise Guide to The Devil and His Works ​(EER 2021).

The Passing of The Horse

A Transformation of the World 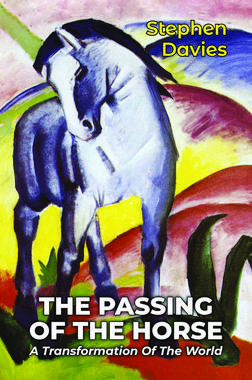