This most unusual book traces the interrelations of architecture, horticulture, literature, social history and gender.

The Victorian conservatory and the lady enclosed within it proved to be ambivalent, enigmatic and self-contradictory. What began optimistically as protection ended as imprisonment. The metaphor offers a vision of fractured femininity, juxtaposing the vegetable against the human in a dialogue of disjunction and paradox.

The work is illustrated throughout with images from garden history texts, photographs, paintings and architectural drawings. It especially examines the critical ambivalence of the conservatory space and its paradoxes.

By the middle of the Anglo-American nineteenth century, greenhouse design and gardening had developed to the point where writers and painters saw the heated glass conservatory as a space that captured symbolically the paradoxes of nurture and display thought “natural” to the Victorian lady.

In a series of narrative encounters, some fictional, others historical, this book explores the implications of the introduction  of “Glass Consciousness” which was most famously dramatized by Joseph Paxton’s innovative Crystal Palace in 1851.

The author examines key figures and their works. These include Paxton, whose triumphs included being the first in England to bring an Amazonian water lily into flower. Dr. Darby also closely examines Nathaniel Ward’s experiments and the work of Shirley Hibberd, John Stuart Mill and Donald Winnicott - all influential men who theorized nurture.

12 colour & 12 black and white illustrations (from garden history texts, photographs, paintings and architectural drawings). Ch.1, “Nurture Under Glass,” Joseph Paxton’s triumph in being first in England to bring an Amazonian water lily into flower leads to an examination of the ambivalence of the conservatory space and its paradoxes. Ch.2, “Imperfect Perfections,” links Nathaniel Ward’s experiments to the work of Shirley Hibberd, John Stuart Mill and Donald Winnicott, all influential men who theorized nurture. Ch. 3, “The Lady and the Gardener,” examines three women who published works about the lady with a conservatory: Henrietta Moriarty, Jane Loudon and Louisa Johnson. Ch.4, “Marital Strategies for the London Season,” examines the London paintings of James Tissot and the diaries of debutante Alice Catherine Miles. Ch. 5, “The Death of a Hothouse Flower,” offers a reading of the conservatory scene in Edith Wharton’s The House of Mirth.

Margaret Flanders Darby retired from the Colgate University (Hamilton, New York) Writing & Rhetoric Department in 2015. Her essays on Victorian glasshouse metaphors of femininity have appeared in Victorian Literature and Culture, as well as in essay collections for Yale University Press and Dumbarton Oaks (Harvard University). She has also published essays in Dickens Quarterly, Dickens Studies Annual and The Dickensian on gender and women’s voices in Dickens’s novels. “Dickens and Women’s Stories: 1845-1848 (Part One)” is reprinted in Dickens, Sexuality and Gender (Ashgate, 2012).  Her essay on Dickens’s Swiss Chalet is included in Dickens and Women ReObserved, edited by Edward Guiliano, to be published by EER in 2020.   She presently serves as the review editor of Dickens Quarterly. 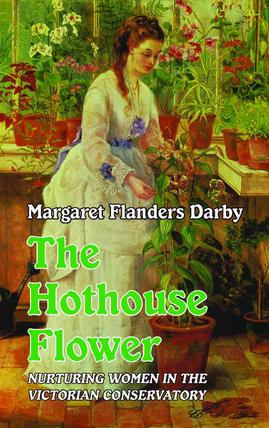 Nurturing Women in the Victorian Conservatory