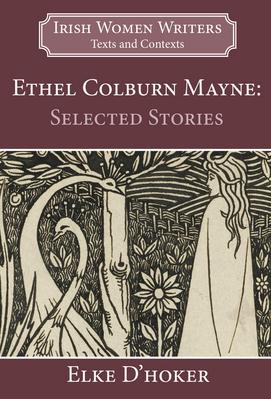 Ethel Colburn Mayne (1865-1941) is a now largely forgotten Anglo-Irish writer who was born and raised in Ireland, but settled in London to pursue a literary career in 1905. She became a respected literary figure there, publishing novels, short stories, biographies and translations. It is for her short stories that she received the greatest acclaim, often being compared to Henry James and Katherine Mansfield.

Mayne published six collections of stories between 1898 and 1925. This book offers a selection of the best stories from these collections, with a particular focus on stories that have an Irish setting and/or Irish characters. The stories printed in this volume are preceded by an introduction that gives an overview of Mayne’s life and career and places her work, and her short fiction in particular, within the literary context of the time. Mayne’s first story came out in The Yellow Book under the pen-name of Frances E. Huntly in 1895. She then published novels: Jessie Vandeleur (1902), The Fourth Ship (1908), Gold Lace: A Study of Girlhood (1913), One of Our Grandmothers (1916), and her collections of stories, including Things That No One Tells (1910).

Mayne’s work is out of print and has been for a long time. She has received some attention recently as a contributor and sub-editor of The Yellow Book and her early work has been classed alongside that of other (Irish) New Woman writers. Yet, the rest of her work is interesting and significant as well: her short fiction bridges the gap between fin-de-siècle symbolism and the modernist short story, while her novels and some or her short stories give an invaluable perspective on the constrained lives of the daughters of the Anglo-Irish gentry in the late nineteenth century.

Her work certainly deserves to be better known, much like that of contemporaries like Norah Hoult (who knew her), George Egerton, Katharine Tynan or L.T. Meade who have also received renewed attention in recent years. A bibliography is also provided.

Elke D’hoker is Professor of English Literature at the University of Leuven, and co-director of the Leuven Centre for Irish Studies and of the modern literature research group, MDRN. She has published widely in the field of modern and contemporary British and Irish fiction, with special emphasis on the short story, women's writing and narrative theory. She is the author of a critical study on John Banville (Rodopi, 2004) and of Irish Women Writers and the Modern Short Story (Palgrave, 2016). She is also co-editor of several essay collections: Unreliable Narration (De Gruyter, 2008), Irish Women Writers (Lang, 2011), Mary Lavin (Irish Academic Press, 2013) and The Irish Short Story (Lang, 2015).

‘Elke D’hoker’s Ethel Colburn Mayne, Selected Stories brings to light a sample of work by an unjustly neglected writer, recovering a selection of texts that have been long out of print. The book is purposefully structured, charting the changing shape of a writer’s work in the form of the short story. This is a text to relish: the choice of stories is prudent and generous, and D’hoker’s introductory essay is thoughtful and considered. An exemplary instance of recovery, which will assist in the reclamation of a writer of real significance’. - Paul Delaney, author of Seán O’Faoláin: Literature, Inheritance and the 1930s and co-editor of The Edinburgh Companion to the Short Story in English.