The Statistical Movement in Early Victorian Britain
The Foundations of Empirical Social Research.

​Classics in Social and Economic History series, no. 15.

This work is the established deep analysis of the ideas, institutions and men who coalesced into what became the characteristically Victorian statistical movement to probe, measure, quantify and reform society. This was intended “to prevent misfortune and vice, sickness and improvidence.”

The early Victorians, in an age of serious social tension and the threat of tumultuous unrest, found it imperative to know the reasons behind multiplying challenges to their society. Faced with ‘the condition of England’ question they sought its causes.

At the root of that search was the cluster of values known as the ideology of ‘improvement’.

The book is set in two chief contexts: the statistical movement is seen as an outgrowth of a long period of development in the use of quantification to study social problems (which is here surveyed). And it is seen as a response to the social and political needs of the time when information and analysis was crucial to government.

This work forges a valuable intellectual link in the chain that unites the earliest forms of social enquiry with Henry Mayhew, Charles booth, Seebohm Rowntree and the modern statistical sciences of society.

Dr. Cullen – trained in both history and mathematics - shows that social statisticians tended to concentrate on public health and education questions as the explanations of tension. They sought remedies in changing the environment of the poor in order to change their characters.

The book is based on work undertaken at the University of Edinburgh, which won the Dr. Cullen the Jeremiah Dalziel prize in History for outstanding work.

“Dr. Cullen provides detailed information on a topic which until now has been inadequately investigated, and he presents it with extensive documentation and a bibliography of primary sources. His excellent book will be of central interest to many historians of medicine, mostly to those dealing with public health and medicine in the first half of the 19th century”.  Medical History. 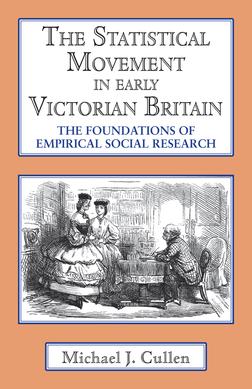