"magisterial, and both deeply-and extensively researched ... by a leading expert both in the field of Dickens studies and in that of the history of medicine..."

"This new book is a brilliant concept, expertly told and gives a fascinating insight into Victorian medical conditions with a 21st century medical understanding.”

"As well as illuminating a new aspect of the life of Dickens, this book is ... also an interesting and informative account of medical practice in the mid nineteenth century."
- Sir Richard Thompson, Past President, Royal College of Physicians.

Dickens had a life-long obsession with health and medicine. This landmark new book documents this more fully than ever. It is valuable, too, for studies of public health changes in the 19th-century.

Bleak Health - by a medically-trained literary historian - offers an in-depth study of Dickens’s life and letters from a medical viewpoint, throwing new light on his world; his medical history; that of his family, and his obsessions.

This is the first time that a comprehensive account of the health of Charles Dickens and his family has been published in one volume. It will provide a key reference for his readers.

The Victorians were preoccupied with their health and the connection between mind and body – and Dickens was no different. He tried to keep healthy by going for long walks, taking daily shower baths and keeping abreast of medical issues of the era. Despite these efforts he developed 20 illnesses during his lifetime. These included chronic carbon monoxide poisoning, gonorrhoea, tic douloureux, asthma, gout, a painful anal fistula and transient ischaemic attacks; he finally died from apoplexy. To treat his ailments Dickens tried all the standard therapies of the era such as bloodletting, blistering and purging. He was also reliant on medicines including laudanum, Cockles antibilious pills and calomel.

Apart from the family practitioner he became friends with several leading doctors including the mesmerist John Elliotson and the public health reformer Thomas Southwood Smith. Through these relationships Dickens himself became an expert mesmerist and an enthusiastic campaigner for public health improvements.

Bleak Health provides new insights into the health of Dickens’s family. A detailed account is given for the first time of Dickens’s father’s tragic final illness from a ruptured urethral stricture including the treatments and surgeons involved. The book describes the difficult confinements endured by Dickens’s wife Catherine who had 10 children. After her seventh confinement, Catherine received chloroform anaesthesia because Dickens decided that she should be free of pain. Later, Dickens often referred to Catherine’s 'nervous condition’ believing she was suffering from a mental illness. This may be the reason why he wanted her admitted to a lunatic asylum.

Dickens often bore the responsibility for the health of his siblings and after their deaths he helped support their families. Six out of seven of his siblings died at an earlier age than he did, including two in childhood. His sister Frances died from consumption. His letters describe her harrowing symptoms in graphic detail in the days before her death. Consumption also claimed the lives of two brothers. Dickens’s younger brother Frederick died of asphyxia caused by a burst abscess of his right lung.

Dickens had seven sons and three daughters who overall pleased him more as youngsters than they did as adults. They suffered with a variety of infectious diseases including scarlet fever, measles, whooping cough, cholera and smallpox. Two of his sons were troubled with deafness and one developed stammering and suffered with sleepwalking. Two sons died from heart attacks, one from a burst aortic aneurysm and the eldest son died of apoplexy, like his father. His most successful son, Sir Henry Fielding Dickens, died from his injuries after being hit by a motorcycle.

Dr. Nicholas Cambridge is an Honorary Research Fellow in Humanities at the University of Buckingham. In 2017 he was a Visiting Scholar in Medical Humanities at Dalhousie University, Nova Scotia. He worked for 25 years as a general medical practitioner in Surrey, England, when he also obtained an MD degree in Medical History from the University of London. He is a well known lecturer on Dickens, and the author of several papers on Dickens in relation to medicine.

"This magisterial, and both deeply-and extensively researched, study of the medical history of Dickens and of that of his immediate family, written as it is by a leading expert both in the field of Dickens studies and in that of the history of medicine, will be of the greatest interest not only to all Dickensians but also to all students of medical history."
- Professor Michael Slater.
"One of the huge privileges of being a descendant of Charles Dickens is the amount of research available on all aspects of his life. This new book is a brilliant concept, expertly told and gives a fascinating insight into Victorian medical conditions with a 21st century medical understanding.”
​- Ian Charles Dickens. President of the Dickens Fellowship.
"Dr Cambridge has searched the literature, and the 14,00 letters written by Charles Dickens, to describe all the many ailments to which the famous author and his family were prone. Being medical, Nicholas Cambridge has been able to set their various diseases in the medical context of the middle of the nineteenth century, including stories of some of the leading doctors of London. As well as illuminating a new aspect of the life of Dickens, this book is therefore also an interesting and informative account of medical practice in the mid nineteenth century."
- Sir Richard Thompson, Past President, Royal College of Physicians.
​"It provides the reader with a highly accessible yet thorough and authoritative account of the medical circumstances of Dickens's life. It is a book to be welcomed and enjoyed by enthusiasts in 19th-century social and medical history, by medical enthusiasts, and by Dickensians. The book is well produced and engagingly written, the result of much detailed investigation and is to be fully recommended."
- Dr. Tony Williams, Associate Editor, The Dickensian. 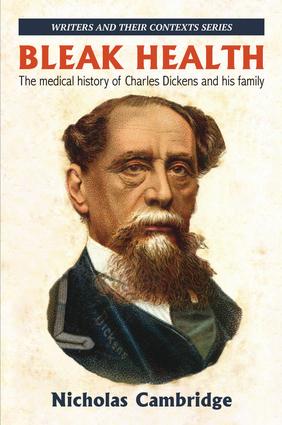 Writers and Their Contexts series no. 18

The medical history of Charles Dickens and his family