​This new work offers significant insights into the governance of the British Raj, and the development of Irish home rule – in all of which Sir Antony Patrick MacDonnell played major roles.

“You are about to leave India,” George Curzon, the Viceroy of British India, told Sir Antony Patrick MacDonnell in 1901 at the end of a long career, “with a record—unprecedented at the present moment—and equal to the most illustrious of Indian administrators in the past.” Curzon was not alone in his estimation of MacDonnell as the most eminent and accomplished of late-Victorian civil servants in India.

What was even more extraordinary was that even though the Viceroy’s encomium in 1901 was written after MacDonnell had been a member of the Indian Civil Service (ICS) for some thirty-six years, he was about to embark upon a second distinguished administrative career as Under Secretary for Ireland.

A Roman Catholic from County Mayo, an eventual Home Ruler, and a Gladstonian Liberal, MacDonnell rose to the upper echelons of the Indian and Irish Civil Services. MacDonnell, perhaps in part because of his Irish nationality, was known throughout his Indian career as a staunch champion of the ryot class, India’s peasantry. His attention to detail and tremendous energy rendered MacDonnell a leading authority on tenant right and famine relief.

He served as administrative chief of four provinces in India. Yet it was in Ireland that MacDonnell’s attempts at major land reform were realized in the Irish Land Act of 1903. Several failed schemes to erect a Catholic university and a scuttled Irish Council Bill, however, led to MacDonnell’s resignation in 1908, and in the same year he received an Irish peerage as Baron Swinford.

This unique and original biography not only examines Sir Antony MacDonnell within the context of British imperial administration of India and Ireland in the late-nineteenth and early-twentieth centuries, but also considers the ambivalence and preoccupations of a very significant Irish imperialist, who possessed equally as many friends as enemies.

Dr. Michael L. Brillman is a noted specialist historian of the British Empire, Ireland and India. He teaches at The College of Arts and Sciences, Santa Clara University, California. His work has been widely published in journals. He has taught at the University of Chicago (from which he holds a Ph.D), Florida International University, DePaul University, the University of Mary, and The Harrisburg Academy.

"An insightful, thoroughly researched biography of fin-de-siècle Ireland’s most distinguished Catholic civil servant, Sir Antony MacDonnell. It will be welcomed by students of Indian, Irish, and British imperial history." 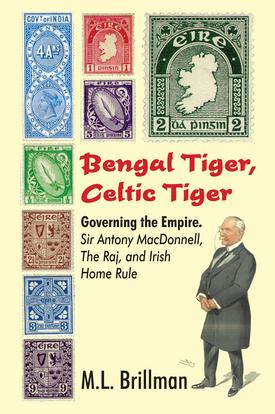