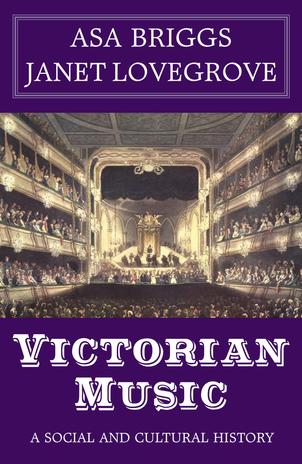 It completes the acclaimed series of classic studies by Professor Briggs, published as Victorian Cities, Victorian People, and Victorian Things.  Lord Briggs has written the work with the music specialist Janet Lovegrove.

The approach is deliberately chronological. It observes the music scene - both metropolitan and provincial - at twenty-year intervals. It particularly shows how contemporaries themselves perceived music in 1837, 1857, 1877 and 1897.

These twenty-year intervals bring out the scale of change and the balance between continuities and contrasts at each point in the story. The intervening decades are more briefly explored.  An Epilogue (1901) completes the picture.

The authors trace the repertory of opera, of orchestral, choral, chamber and popular music. They show the performers, theatres, halls and rooms. They provide many illuminating stories of the lives and work of the composers, writers and critics, publishers, teachers and lecturers, who were keen to bring music to the many rather the few.

London was linked to the provinces by cathedral, church or festival, and education. Key factors were the dissemination of printed music, the musical evangelism of the sight-singing movement, the national distribution achieved by the railways, and the implementation of a national educational system from 1870 onwards.  An important element in this was the contribution made to ‘progress’ by provincial cities, most often through the proliferation of Festivals.

No less important were the efforts of English musicians, composers, performers and teachers alike, to achieve status in a country where there was a strong amateur presence.

There was also pressure from below, and a difference - often an indifference - in the role and interests of government, local and national.  However, the dynamic steps taken to found modern music institutions are traced.  Comparisons are made (as did the Victorians) between English and foreign performers and composers, the ‘giants’ of the past and present.  The last chapters show the breaking away, never complete, from ‘foreign domination’ and the identification of an English musical ‘renaissance.’

The book is well illustrated. These pictures complete the overwhelming impression of an era teeming with energy and ambition, in music as in all else. The era laid the foundations of the musical heritage and standards we enjoy today.

The acclaimed historian Lord Asa Briggs left this work behind when he died in March 2016. His co-author, Janet Lovegrove, read music at Cambridge, and worked in general publishing, lastly as sub-editor of Vogue.  She describes herself as a musical jack-of-all-trades: teaching, singing, coaching, lecturing and writing.

A social and cultural history