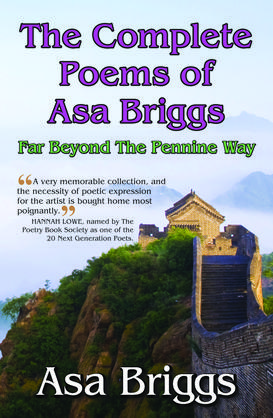 This is a book of 100 poems of great richness and variety. Indeed, it is genuinely a landmark book, and an important literary and academic event in itself.

The author, a vivid writer, also provides a “strictly necessary Introduction” in which he discusses his ideas about poetry and how and why he has written poetry over the years. The publication of this book is an important cultural event. It will take its place amongst Lord Briggs’ other classic works, his five-volume history of the BBC, his trail-blazing The Age of Improvement 1783-1867, and his famous historical trilogy Victorian People, Victorian Cities, and Victorian Things.

​Professor Lord Asa Briggs was one of the most important historians of Britain. He is world-renowned for his work in social history, culture, and communications. He has also been a national and international leader in education, and in life-long learning.  He has been Vice-Chancellor of The University of Sussex, Chancellor of the Open University, Master of Worcester College, Oxford, and Chancellor of the Open University, of which he was one of the originators. He served as an intelligence officer at Bletchley Park during World War Two.

Revealed only in his nineties, he had been writing poetry since he was 13. But this is the first publication of this body of his literary work.​ Asa Briggs, sadly, died shortly before publication. However, he had received advance copies of his 'Complete Poems' several weeks earlier and was delighted to see the production of this important addition to his published works: and to his autobiography.

“A very memorable collection. ’The traveller is me’ declares Asa Briggs in the opening poem, signalling the poet’s movement through time, space, perspective and language – a poetic odyssey until now kept secret.

“The concerns of politics and place, love, life and memory combine to make a very memorable collection, and the necessity of poetic expression for the artist is brought home most poignantly in a closing line: ‘I need so much to write'.”

Hannah Lowe, named by The Poetry Book Society as one of the 20 Next Generation Poets. Her publications include Chick  and Long Time No See.

​​The Complete Poems of Asa Briggs
Far Beyond The Pennine Way