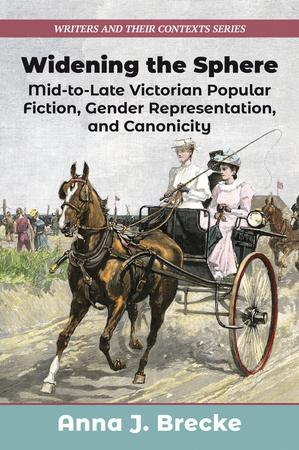 This work addresses the erasure of popular women writers in the formation of Victorian studies. Mid-century critical work on the Victorian novel, which established a long-standing canon, was mainly concerned with the form of the novel rather than the literature of the Victorian period. Particularly overlooked were the popular works produced by women writers in sensation fiction, New Woman fiction, and speculative fiction. The absence of these writers and genres created an incomplete picture of women’s writing, and served to reinforce assumptions about gender roles and gendered space in Victorian literature and culture.

Dr. Brecke begins with a genealogy of studies on Victorian novels from the 1880s through to contemporary scholarship. She tracks the range of writers and genres included before and after the mid-century point. She then turns to examples from sensation, New Woman, and speculative fiction to illustrate the way in which female characters and gendered spaces in these genres transgress norms of feminine representation commonly associated with realist fiction.

Novels and short stories by Mary Elizabeth Braddon, Marie Corelli, Rhoda Broughton, Florence Marryat, Amy Levy and Eliza Lynn Linton reveal that gender and space interact differently in popular genres where the “separate spheres” of public and private life frequently intertwine. By combining the history of Victorian fiction with readings of representative writers, this new work presents an invaluable and fuller understanding of the scope of Victorian authorship and the representation of female characters.

Introduction.
A gap in the study of Victorian Literature.
Creation and disruption of a Victorian canon.
Alternative constructions of femininity and domestic space in the sensation novel and the ‘New woman’ novel.
A new critical conversation.
Bibliography.
Index.

​
Dr. Anna J. Brecke is a Lecturer at the Rhode Island School of Design. Her Ph.D. was from the University of Rhode Island. Her research focuses on gender and popular media in the 19th century and today. Her specific interests include non-canonical 19th-century women’s writing, the periodic press and serialized narrative, television and the gendered body, and supernatural/speculative fiction. Her work can be found in The Victorian, Victorians Institute Journal Digital Annex and Media Report to Women. She is a co-founder of the Mary Elizabeth Braddon Association and reviews editor of the Victorian Popular Fiction Association journal Victorian Popular Fictions. She also works as an area chair in Women’s and Gender Studies for the Mid-Atlantic Popular & American Culture Association and can be heard discussing Mary Elizabeth Braddon’s literary legacy on episode 4.5 of The Victorian Scribblers podcast.

​Writers and Their Contexts series no. 17