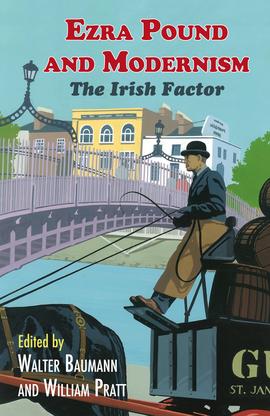 That Ezra Pound was the chief architect of Modernism in English and American poetry is well established. So, too, is the fact that in T. S. Eliot he discovered a peer, whose early career he fostered. Together, Pound and Eliot defined what Modern Poetry meant. But they also had peers in two great Irish writers: Yeats in poetry and Joyce in fiction. With them, they were major shapers of the Modernist style. The Age of Modernism was dominated by American and Irish writers who took part in reshaping the English literary tradition in the twentieth century. “Ezra Pound and Modernism” was the topic of the 25th Ezra Pound International Conference in Dublin in July of 2013, and the papers selected for this volume clearly demonstrate that.

Modernism had both American and Irish roots. Modernism in English literature had its origins in the work of Irish and American writers.  Pound was the chief advocate of a new literary style in English, which the writings of Yeats, Joyce, and T. S. Eliot would articulate. Ulysses and The Waste Land, published in the same year, 1922, would become its complex masterpieces, still challenging readers after nearly a century, and still unsurpassed.

Walter Baumann, a native of Switzerland, is a retired Senior Lecturer of the University of Ulster, where he taught German literature and language. He obtained his Dr. phil. degree from the University of Zurich. His dissertation was published by Francke Verlag in Bern in 1967 and the University of Miami Press 1970 entitled The Rose in the Steel Dust: An Examination of the Cantos of Ezra Pound. He has been a student of Ezra Pound for 60 years. From 1976 to the present he has attended and helped to organize all but two Pound conferences. His collected Pound essays were published by the National Poetry Foundation in Orono, Maine, in 2000 under the title Roses from the Steel Dust. With William Pratt he edited Ezra Pound and London: New Perspectives (AMS Press, New York, 2015) and Ezra Pound and Modernism: The Irish Factor (forthcoming from EER).

"Modern literature remains challenging to readers after a century as the dominant form of expression, but it is as worthy as ever of intelligent assimilation. as successive Pound conferences have proved, none more convincingly than the 25th Ezra Pound International Conference in Dublin in 2013, from which this volume of papers was selected." - Professor David Pierce.

​​Papers from the 25th Ezra Pound Interna­tional Conference in Dublin, 2013