This major new study of the publishing history of the Irish novelist Charles Lever gives in microcosm the history of a significant number of Victorian novelists, and of publishing itself in fast changing decades.

The work illustrates the rise to prominence of the new railway libraries, the changes in taste and reading habits, and in marketing strategies as the century progressed. It shows the intimate relationships which often existed between publisher and authors, and the often feckless business sense of several mid-Victorian novelists.

Charles Lever (1806-72) was one of the most prolific and best-selling authors of the 19th century. He was the best-known Irish novelist of the time, whose influence spread far and wide. The author of 37 books including Tom Burke of Ours, the best novel of the Napoleonic Wars, and many titles essential to a modern understanding of Irish life and society.

Lever led a picaresque life: in 1827 he went to the Canadian frontier, passing some time with Indians. In 1828 he went to Germany, visiting Goethe at Weimar. He lived for many years in Italy, where he died. He was the friend and rival to Dickens, mentor to the early Thackeray, and praised and remembered affectionately by Anthony Trollope.

He achieved great popular esteem in the 1840s and 50s, only to see his fame eclipsed by the vagaries of popular taste, by a radical change of style and subject matter, and by the constant antagonism of some of the Irish Nationalists. Truly his career was the rise and fall of a giant.

Like many of his fellow tale-tellers Lever was many things to many men, essentially an amateur practising in a world growing rapidly more professional. Doctor, Consul, Editor, Essayist,  he made ends meet through a hand-to mouth scramble with serial publication, with deadlines, with other legitimate calls upon his time, and with often thwarted political ambition.

No Victorian creative writer more comprehensively illustrates the ups and downs of the nearly-but-not-quite-first rate. A comprehensive Bibliography is long overdue both as a tribute to the author himself and as exemplum of publishing in a crowded, rich and exciting period.

His publications include George Crabbe, a Critical Study, Malcolm Lowry in the Macmillan ‘Modern Novelists’ series. He co-authored George Crabbe: A Bibliography. He edited The Art of Anthony Trollope for Vision Press, and the ‘Casebooks’ on Trollope, and on Tom Stoppard’s early plays. Elsewhere he has published widely on Shakespeare, Ouida, Charles Lever, Robert Bolt and TS Eliot.

Professor Bareham was one of the organisers and a regular contributor to the annual International Conference on Literature held at Bagni di Lucca under the auspices of the University of Pisa. His contributions here have reflected his wide interests ranging from eighteenth century pleasure gardens, the English Country House poem, and literary figures within the British Consular system.

​"Literary Criticism comes and goes. What endures are bibliographies---the anatomies of Literature. Terence Bareham's bibliography of Charles Lever, the work of decades, is both scrupulous and timely. Charles Lever is now recognised as a great Irish novelist and man of letters. Bareham's book is an essential starting point for anyone---reader or scholar---embarking on Lever's important corpus." - John Sutherland, Lord Northcliffe Professor Emeritus, University College London. 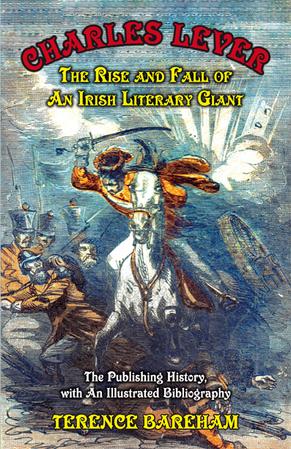 Charles Lever: The Rise and Fall of an Irish Literary Giant

The Publishing History with an Illustrated Bibliography

With a preface by John Sutherland