The first detailed reference and critical guide to Anglo-Jewish writing. It offers accurate and up-to-date information on the lives and accomplishments of its subjects, as well as expert summaries and criticism of their works.

Baker and Shumaker eschew theoretical formulations to offer a comprehensive view of many important poets, dramatists, fiction and nonfiction writers, as well as literary critics and other scholars.

Each chapter gives an overview of the similarities and differences of the writers’ Anglo-Jewish experiences and how those experiences influenced them.

Writers covered in the first volume include, in the first section, the Victorians and pioneers E. O. Deutsch, B. L. Farjeon, Israel Gollancz, Leonard Merrick, Lazarus Aaronson, and others.

The concluding bibliography is divided into a detailed alphabetical enumerative listing of writers’ work followed by a listing of critical works about them. A comprehensive index in volume two draws the volume together.

William Baker is distinguished university professor emeritus at Northern Illinois University and Visiting Professor at Zhejiang University, PRChina. The author or co-author of over 150 refereed articles and 31 books, he has written extensively on Pinter, Stoppard and Kops and other Anglo-Jewish writers including many contributions to The Oxford Dictionary of National Biography. His other work includes books on George Eliot, Wilkie Collins, Jane Austen and William Shakespeare. He edits George Eliot-George Henry Lewes Studies and co-edits The Year's Work in English Studies.

“Often neglected, forgotten or overlooked, the writers in this essential reference and critical guide to Anglo-Jewish writing by Baker and Shumaker find a new and important prominence. In its comprehensiveness and detail, the two volumes provide an indispensable text that will undoubtedly become the standard work for a set of writers known and unknown.”

"this two-volume collection discusses Anglo-Jewish authors and their works... this is a useful historical and chronological survey of this literary subgenre. Especially noteworthy are the bibliography of primary and secondary sources and the comprehensive two-volume index. As both a reference work and a source for literary analysis, this set fills a void in the literature on Anglo-Jewish authors. Recommended. Upper-division undergraduates through faculty." CHOICE.  Donald Altschiller, Boston University. 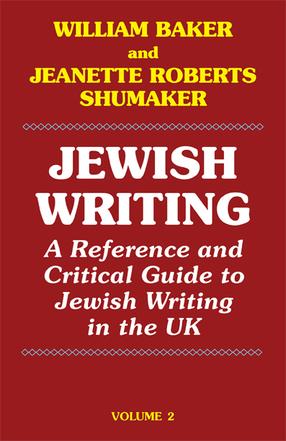 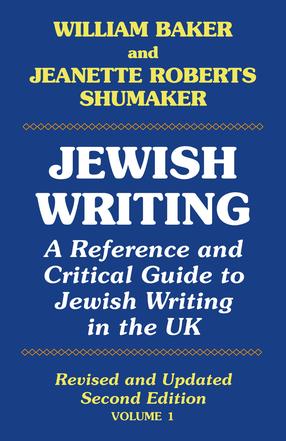 A Reference and Critical Guide to Jewish Writing in the UK