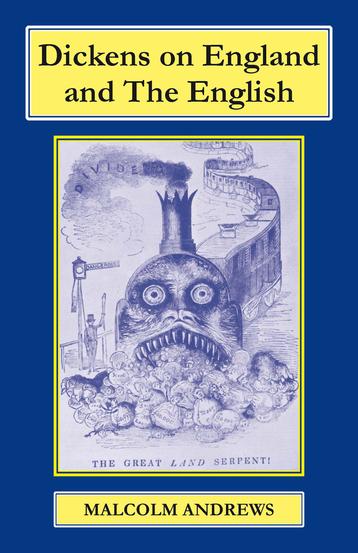 Dickens on England and The English

Second edition, with a new Preface by the author.

Dickens on England and the English explores Dickens’s attitudes towards and relationships to his country, drawing on a very wide range of his fiction. It offers an account of his often complex and contradictory views of the people and the country that provided the sources of his imaginary world.

Dickens is the great painter of English manners – and, for better or worse, the images of his country which so vitally emerge from his books have become indelibly part of the national character.

His books reflect the changing England of his time, so often poised between the softly focused Pickwickian idyll and the hard-edged, brutal contemporary world. The England of the 19th century and the England of the English imagination crowd one another in his pages.

​Malcolm Andrews is Emeritus Professor of Victorian & Visual Arts, University of Kent, and Editor of The Dickensian.

​“Like the companion volume, Michael Slater’s Dickens on America, Malcolm's volume is a standard resource, much used by scholars and novices. The entries are judiciously chosen and editorial matter accurate and informative”. Professor Paul Schlicke, University of Aberdeen and University of Buckingham.

“What a pleasure to see Malcolm Andrews’s witty and independent-minded study back in print!  Joyfully aware of the amazing vitality of Dickens’s comic and visual imagination, Andrews’s now-classic Dickens on England and the English makes discoveries and finds unexpected connections across the whole extraordinary range of Dickens’s life and writing."  Professor John Bowen, University of York


“Now that we are having to think again about what it means to be English, it is good to have this book to hand. This book draws its evidence not only from the novels but from the widest range of Dickens's writing. Above all, it brings together carefully chosen extracts from his letters, journalism and essays”. Elizabeth James, formerly of the British Library.