The ‘Prince of Puffers’:

​The Life and Works of the Publisher Henry Colburn.

NEWS January 2019:  We are delighted to announce that this book has been nominated for the SHARP DeLong Book History Book Prize 2019

This is the first-ever book length study of one of the most important and constantly innovative 19th century book and periodical publishers. The mysterious and often elusive but enormously influential Henry Colburn (c.1784 – 16 August 1855) was the pre-eminent publisher of ‘silver-fork’ novels, and of many influential new writers.

Colburn’s main claim to rehabilitation are his troop of 'name' authors: Lady Morgan, Disraeli, Bulwer-Lytton, Captain Marryat, G.P.R James, Mrs. Margaret Oliphant, Mrs. Catherine Gore, Mrs. Caroline Norton, Frances Trollope, Anthony Trollope, Richard Cobbold, R. S. Surtees. Many would not have had a start in the careers they later enjoyed were it not for Colburn.

This is a lively, and important new work on early 19th-century publishing and the patterns for the century which Colburn set. It sketches in
tantalizing outlines the Regency, early nineteenth-century and Victorian book trades – and the consequences of Colburn’s impact on those worlds. In addition, the work centres on Colburn’s most celebrated authors. The book – which is well illustrated - contains the first catalogue of Colburn’s publications.

Thus far, literary and publishing history have drawn a formidable charge sheet against Henry Colburn. In personal pedigree he is slandered as a ‘guttersnipe’, or a ‘royal bastard’. In Disraeli’s pungent description he was a publishing ‘bawd’, engaged in wholesale literary prostitution. A very bad thing. And yet this publishing Barabbas can be argued to have been innovative and a force for constructive change in the rapidly evolving book trade and---paradoxically---a man of taste.

Various rumours circulated that he was either a bastard of the Duke of York or of Lord Landsdowne. Date uncertain. He liked to weave illustrious (typically mendacious) pedigrees for himself as much as for his dubiously aristocratic purveyors of silver forkery.

What, precisely, did Colburn do that should raise his reputation and make us see him as a good thing? In the largest sense he demonstrated, by example and practice, the need for consolidation between hitherto dismembered arms of the London book world. Beginning his career at apprentice level in the London West End circulating-library business he went on, having learned at the counter what the customer wanted, to become the undisputed market leader in the publication of three-volume novels and (sub-Murray) travel books.

The three-decker went on to become the foundation-stone of the ‘Leviathan’ library system (Mudie’s and Smith’s) and created a seventy-year stability in the publishing, distribution and reception of English fiction.

In 1814 Colburn founded the New Monthly Magazine. In 1817, he set up England’s first serious weekly review, the Literary Gazette. In 1828 he helped found the Athenaeum (distant parent of today's New Statesman). His behaviour, as a magazine proprietor and editor at large was typically outrageous. But the link he forged between higher journalism and literature was momentous.

CONTENTS
List of Illustrations
Preface: Who Was Henry Colburn?
1. Henry Colburn: The Charge Sheet
2. The Case for the Defence
3. Colburn’s Origins
4. Colburn’s Age and Birth: A Puzzle with Some Importance
5. The Rise of Henry Colburn
6. The 1812 Break into Independence
7. Fully Fledged
8. Magazinery
9. Colburn’s Business Practices Examined
10. Colburn among the Vampyres
11. The Literary Gazette
12. Magazinery without the Drama
13. The Prince of Puffers: A Defence
14. Crisis
15. The First Decade: Summary
16. Colburn’s Heyday
17. Saunders and Otley
18. The Great Crash: A Perverse Opportunity for Colburn
19. Disraeli
20. Loyalty and Friendship
21. Jewels among the Silver Forks
22. A Digression
23. Upcott and Colburn
24. Pepys
25. Richard Bentley, Publisher
26. ‘One of the Best Businesses in London’
27. Love and Business: A Digression
28. The Partnership
29. Puff, Puff Together

Dr Veronica Melnyk (Johanna Marie Melnyk) is an independent American scholar. She earned degrees from DePaul University in Chicago and the University of Birmingham, where she completed her doctoral thesis on Henry Colburn, in which she turned up a wealth of hitherto unexamined material. This is her first book. She is now a member of the Olivetan Benedictine Sisters of Jonesboro, Arkansas.

"Rogue Publisher: The “Prince of Puffers”: The Life and Works of the Publisher Henry Colburn, discusses a “prime mover” in Victorian publishing often portrayed as a “louse on the locks of literature” : the opportunistic and highly successful Henry Colburn… sheds light not only on the man and his practices, but on the larger context of Victorian publishing.”
Professor Pamela K. Gilbert - Recent Studies in the Nineteenth Century. 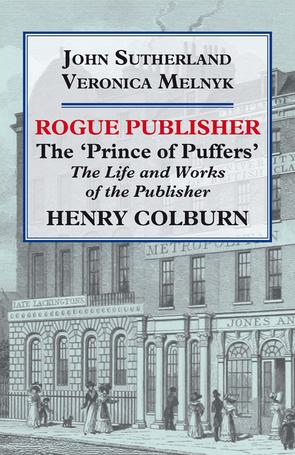