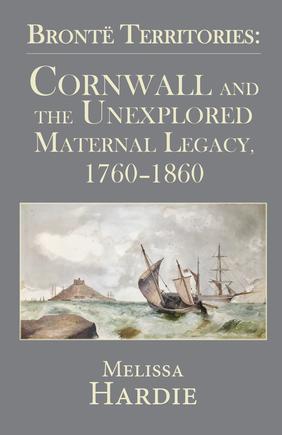 Cornwall and the Unexplored Maternal Legacy, 1760-1870

‘Actually... the Bronte girls got their literary talent from the Carne side, as their Aunt Elizabeth spun wonderfully wild and woolly tales of Cornwall. So there!’  Philip Carne

This new book explores the important maternal background of the great literary family. In highlighting the background of their Cornish mother and her family, it provides a major and fresh source of cultural understanding of the Brontё milieu. Surprisingly ignored until now, Cornish contextual networks and issues are shown to have been very significant in the creative evolution of the writers.

Place-histories of Yorkshire and Ireland have been exhaustively investigated as backdrops to Brontë writings. Largely unacknowledged, however, is the influential agency to their writings that Cornwall, as a mental and spiritual legacy, also offers. Their Cornish kin did much to mould and form capabilities, temperament, and literary concerns.

Born and bred in the town and district of Penzance at Land’s End, Maria (Carne) Brontë (1783-1821) died young at Haworth in Yorkshire, leaving her six children all under 10 years of age. Travelling far to take over the care of the children, her Cornish elder sister Elizabeth (Carne) Branwell (1776-1842) is also virtually ignored in Brontë history. Yet it was Elizabeth who would provide the general tenor, the daily routines and domestic rhythms for the family as children, adults, and creative beings.

This new illustrated study captures the whole milieu in which Maria, Elizabeth and their kinship circle grew up in Cornwall, known even then as a legendary and romantic place. In their everyday life were a number of journalists, travellers, poets, story-tellers, and published academics,  critically influential in their day. The legacies of story-telling, journal reading and direct participation in the life of books were vital.

This volume presents a full cast-list of possible participants in the lives of the constituent families. The focus pivots on the critically important period in which the Wesleyan Methodist emphasis on education and loving usefulness to family and society was to the fore, transforming the face of Cornwall into the Victorian period. In an age of revolutions – American, French and industrial – the Branwells, the Carnes, the Battens and the Fennells were laying new roads into the future.

Melissa Hardie is well-known in Cornish cultural circles, as an author and lecturer, founding director of the Hypatia Trust and patron of the arts.  She was educated in English Language and Literature at Boston University and in Social Sciences at the University of Edinburgh, where she was a senior research fellow. Since 1996 she has been an Honorary Library Fellow and Adjunct Lecturer, Exeter University and of the English department at the University of Falmouth. She is author and editor of a number of previous books, and is also a contributor to the New Dictionary of National Biography.

“Years of original research have enabled Melissa Hardie to offer an unprecedented range of detail about the Carne and Branwell families who were the Brontë sisters’ maternal ancestors. She has established not only their pre-eminence in Penzance society, but also that through extended family ties and friendship circles they provided an intellectual, literary and scientific milieu of hitherto unsuspected wealth. This is an important book for Brontë scholarship which will become a reference point for years to come, opening up new possibilities for lines of enquiry into influences available to the Brontë children through their mother and their aunt, Maria and Elizabeth Branwell."- Professor Patsy Stoneman, author of Brontë Transformations.

"A deeply-researched study that lets in new light on the Brontës, balancing the longstanding image of paternal dominance in the Yorkshire rectory with a valuable reminder that they were also a mothered family, with connections to Cornwall that helped to shape their writing lives." - Professor Penny Boumelha, author of Charlotte Brontë.

"Hardie’s book is a major contribution to the study and knowledge base of the roots and family trees of the Brontes. The tracings of the Branwell and Bronte women are woven into the context of time and places in which they lived and died. This book is not only beautifully written, but reads almost like a novel, unusual for such a carefully and thoroughly researched content." - Melinda Parrill James.

“Her approach is frequently imaginative and sometimes speculative. This is a strength because she is at pains to point out for the reader the limitations of the evidence. This patient work by Melissa Hardie must be counted as filling a deep fissure, or as we might say in Cornwall, a zawn in Brontë studies.” – George Care, Penwithlit magazine.