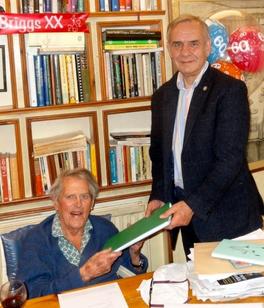 Professor Briggs delivering his typescript - our first book - to his publisher, September 2015

EER Publishers have appointed Robert Baldock as Consultant Editor. He began his career with John Spiers at The Harvester Press, and rejoins John after three decades as Academic Director at Weidenfeld & Nicolson and Managing Director at Yale University Press London.

Two years ago EER established this annual prize in association with the Victorian Popular Fiction Association.  It is in memory of John’s Great Great Grandmother, who died in the Hoxton Workhouse in the poorest part of East London as did two of her 14 children. She has no known grave;

The prize is intended to help young scholars with their reaches. It funds a stay at the Gladstone Memorial Library at Hawarden.

This year the Mary Eliza Root scholar is Lin Young, a PhD candidate at Queen’s University in Canada. Her project concerns the relationship between ghosts and objecthood in Victorian fiction. I argue that spiritualist experimentation into the ‘biology’ of the soul allowed Victorians to imagine themselves more readily as creatures of transmutable matter. The transfer of imagined ‘soul matter’ between the bodies of mediums, ghosts, and the objects assisting their communications allowed all three—the living, the dead, and the object—to be characterized as part of a process of biological assembly and disassembly. My project thus examines experiences of objecthood in supernatural fiction.

Lin says that “Gladstone’s Library contains dozens of primary writings on psychic research that will be valuable to Lin’s project. Among these are writings by Hudson Tuttle, E.W. Allen, William H. Harrison, and other reports of spirit ‘experiments.’  Specifically, Allen’s “Life beyond the grave, described by a spirit, through a writing medium” and Tuttle’s “Scenes in the spirit world, or, life in the spheres” will help me establish the material imagery of the spirit world for use in two dissertation chapters on objecthood in Wuthering Heights, A Christmas Carol, and The Picture of Dorian Gray. This prize would aid me in turning these two final dissertation chapters into two articles, as well as providing me with a solid foundation for my ideal post-doctoral project: a monograph that expands my research into ‘objecthood’ beyond the ghost story and into other popular Victorian genres, such as science fiction, fantasy, and detective fiction."

Thank you for contacting us! If needed, you will hear back within 48-72 hours.
Click here

​Sign up here for EER Gazette for news and discount offers

​
EER (Edward Everett Root) is a Publisher committed to good books in which we believe, and to authors who focus on important topics.

We want to make a difference. In a world of anonymous conglomerates we will do this consistently. We are publishing a relatively small list of carefully selected titles. We focus all of our attention on these titles and on the interests of our authors.

We publish in literature, history, economics, and public policy  - including a series of popular paperback guides to such topics as surviving cancer.

We sell through leading booksellers, Amazon, our own website, and our network of appointed agencies throughout the world.

Some of our new initiatives:

A feature of our list is new works on Irish literature, including the new series edited by Dr. Pilar Villar-Argáiz [Senior Lecturer in British and Irish Literature in the Department of English Philology at the University of Granada ]: Studies in Irish Literature, Cinema and Culture.

​This major new interdisciplinary series of original works offers studies on the different traditions and multiple forms of writing and cultural production in Ireland and Northern Ireland, through to the present day.

Women, Art and Nationalism in the Irish Revival. Presence and Absence
Adela Flamarike


​​About the series editor

Dr. Pilar Villar-Argáiz has published extensively on Irish poetry and fiction, in relation to questions of gender, race, migration and 'interculturality'. In March 2010, she was awarded by her University the Prize of Outstanding Research in the field of Humanities. Dr. Villar Argáiz is currently a member of the board of AEDEI (Spanish Association of Irish Studies) and the Head of the EFACIS Centre for Irish Studies at the University of Granada.

Also now published separately in Irish studies by EER are:

We have now published three of the five acclaimed volumes by Professor Peter Burke, the fourth and fifth of which will be issued in February 2019.

We continue to issue expanded editions of established classics, including the study of the Brontës by Patsy Stoneman, and of Charlotte Brontë by Penny Boumelha.

The new expanded edition of The Birth of A Consumer Society. The Commercialization of Eighteenth-century England by Neil McKendrick, John Brewer, and J. H. Plumb was issued in September 2018.

The co-founder of our new firm, Professor John Spiers, was for 20 years the founder/owner of The Harvester Press of Brighton. His wife Leigh is an active partner in the publishing firm. Leigh is an Art Historian and an experienced manager. For nearly 10 years she was a director of the Art Fund. John was the distinguished and prize-winning publisher of some 2,000 titles in history, economics, international affairs, politics, philosophy, psychology and literature. His associated academic microfilming firm also won The Queen’s Award for Export Achievement.

John has named the firm after his Grandfather, who was a volunteer in the Middlesex Regiment, killed at Ypres in July 1915.

John has an eye for talent, as this new list shows. He previously edited and published J.L. Carr’s Booker-prize runner-up, the now modern-classic novel A Month in The Country. This book also won The Guardian Fiction Prize. He published the international best-seller Godel, Escher, Bach. The Eternal Golden Braid by Douglas C. Hofstadter, and then his work The Mind’s Eye. Each was subsequently placed by Harvester with Penguin.

Harvester’s other successes included The Mathematical Experience by Philip J. Reuben and Hersh Davis, and the leading cognitive-science title Mindstorms by Seymour Papert.

In addition to his work as a professional publisher John is himself a scholar and a well published author. He still holds academic appointments at The School of Advanced Study in the University of London, in the Ruskin Programme at The University of Lancaster, and in the Global Policy Institute at London Metropolitan University.

John built The Harvester Press from scratch over 20 years. It then formed a group of companies sold to Simon & Schuster. John’s other imprint, Wheatsheaf Books, published successful text-books. As with his previous company, he again stresses academic distinction, quality in production, and effective sales.