The Rule of Freedom, or The Benevolence of The Big State?
‘New Liberalism’ and the Heritage of the Welfare State.
Theory, History and Practice in Britain Since 1901.

This radical new book is not a conventional narrative history of ‘New Liberalism’, or of national welfare reform since 1901. It is a series of inter-linked reflective essays about the dilemmas, the benefits and the enormous social, economic and cultural losses that Edwardian and later welfare reforms have occasioned with the imposed limits on personal liberty. The essays go on to investigate possible correctives today. The limitations of our freedoms which we experience were imposed in contradictions by liberals. This work seeks to examine why and how their ‘welfare state’ came about.

The ‘New Liberalism’ of Edwardian Britain and its idealisation of the Big State effectively withdrew us from the theories and practice of classical liberalism. The Liberal Party politician and later Prime Minister David Lloyd George had said that he wanted to resist the growing collectivism of the times, fearing electoral incursions by the rising Labour Party in the new context of substantial male franchise. The fear of socialism became the catalyst of welfare state social politics. However, the result was ‘soft socialism.’

In seeking a new programme for the Liberal Party and in moving the targets of government, Lloyd George marginalised the inherited structure of mutual Friendly societies (which had c.6 million subscribing members) and adopted collectivist policies which opened the doors for socialism. This proved to be an ideological reorientation which was the opposite of classical liberalism. Indeed, each reforming British political party including the Conservative Party since has effectively side-lined liberal capitalism itself. Each has accepted the Big State and the mixed economy.

The consequence of collectivist welfare policies was to set in place a structure of the Big State. This provided tax-based subsidy to providers and State monopoly services. It marginalized competition and dismantled voluntary mutual endeavours - contrary to classical liberalism or libertarian values. Monopoly privilege was created by the state, and not by free-market competition. ‘Vested’ professional and commercial interests were privileged in a hierarchical and bureaucratic system, using the political process adroitly to gain privileges. The individual self-responsible consumer was not empowered to make choices. The pattern was repeated in later ‘reforms’, most notably with the establishment of the National Health Service [NHS] from 1945 onwards. The essential patterns have not changed since then.

Since 2003 Professor John Spiers JP has served as a Senior Research Fellow in The School of Advanced Studies, University of London. He has held Professorial and advisory appointments at several other universities.

He chaired one of the largest NHS Hospital Trusts and was a founding member of the Board of the National Care Standards Commission, as well as advising two Prime Ministers on education and health policy. He was Head of Healthcare Studies at the Institute of Economic Affairs and the founding Chairman of the ‘think-tank’ Civitas. He was Chairman of David Salomons House, the NHS Management Centre, and of the educational organisation The Trident Trust. He was also Chairman, and for a time acting Chief Executive, of The Patients’ Association. 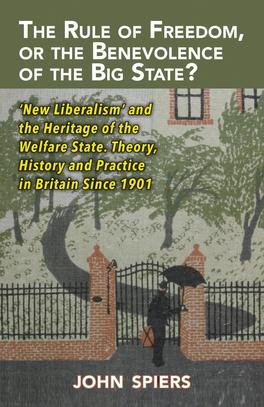