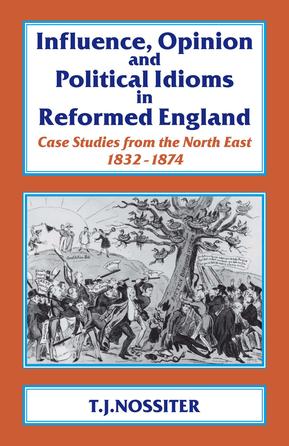 A significant and influential study of how the Victorian system of popular political democracy actually worked.

It examines the precise nature in town and country, and in a variety of situations. It deals with the impact, and in what proportions of ‘influence’, the purse, and the exercise of the individual political conscience.

This work clarifies much, alongside the legislative framework of the system, and analyses the underlying conceptions of politics which guided actions. It also offers a substantive account of economy and society in the North-East – the first area of industrialisation - as the context for political analysis and description.

The author was Professor of Government at the London School of Economics, 1989-94, then Professor and Chairman of the Graduate School, University of Leeds.

“Norman Gash stressed the need for an established basis of local history as the essential groundwork for a study of national politics in the nineteenth century…That the north-east, or at least that area between the Tyne and the Tees, which is actually Dr. Nossiter’s concern, was exceptional in the nineteenth century is clearly illustrated…If he raises national questions rather than providing national answers, this is, after all, a prime function of a locally based study.” – A.J. Heesom, The Historical Journal.